A not-for-profit housing association  in Oxfordshire is helping its tenants lower their energy bills by injecting £6 million into a solar panel project which has seen 942 homes benefit from solar arrays.

Thanks to Cottsway Housing Association, tenants like 71 year-old Margaret  Hudson from Combe have been able to save money on their energy bills as part of a five year energy efficiency scheme which could see as much as £19 million spent on renewable energy technologies.

“I was a bit dubious at first, like everyone else, because it changes the look of your house, but now I think it is absolutely wonderful,” said Margaret. “It is almost as if your electricity is free in the day now. I am over the moon.”

Aside from the solar PV systems, 260 homes also benefited from air source heat pumps. The housing association funded the project with its own money, as well as additional. Being a not-for-profit organisation, Cottsway – which owns more than 4,000 homes across the West Oxfordshire area – will be ploughing any money generated through the feed-in tariff scheme back into other services, helping residents to benefit from even lower energy bills.

“With increasing energy bills, anything we can do as landlords to improve the quality of life to our residents and also be environmentally friendly we will do.”

According to the Kier Group – who worked on the housing association project – tenants will see their electricity bills cut by up to 40% annually. Company director Nigel Sheppard said they were delighted to have been able to work on the project and worked closely with Cottsway to ensure that the needs of their tenants were met. 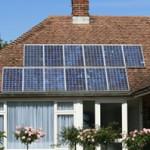 Up to 200,000 council and housing association tenants across the country could be in line to receive free solar panels,…