At Solar Guide we receive enquiries every day from people all over the UK who are interested in installing solar panels on their home. They ask us to find them solar panel quotes from local MCS certified (or equivalent) solar installers who can provide free, no obligation quotes.

Since October 2014 we have received over 11,400 requests from all over the UK, but we wanted to find out where in the UK the most enquiries were coming from. Based on the number of people asking us for solar panel quotes from 996 cities, which are the Top Solar Cities?

By the way: Unsurprisingly London came top for everything, so to get a broader view of the UK we excluded London from the data.

Using the data from 996 UK cities we calculated how many solar panel quotes were requested between 1st October 2014 to 1st October 2018. During this time 46.1% of the total number of enquiries received were from London; the table and map here show the Top 10 Solar Cities for this period excluding London. 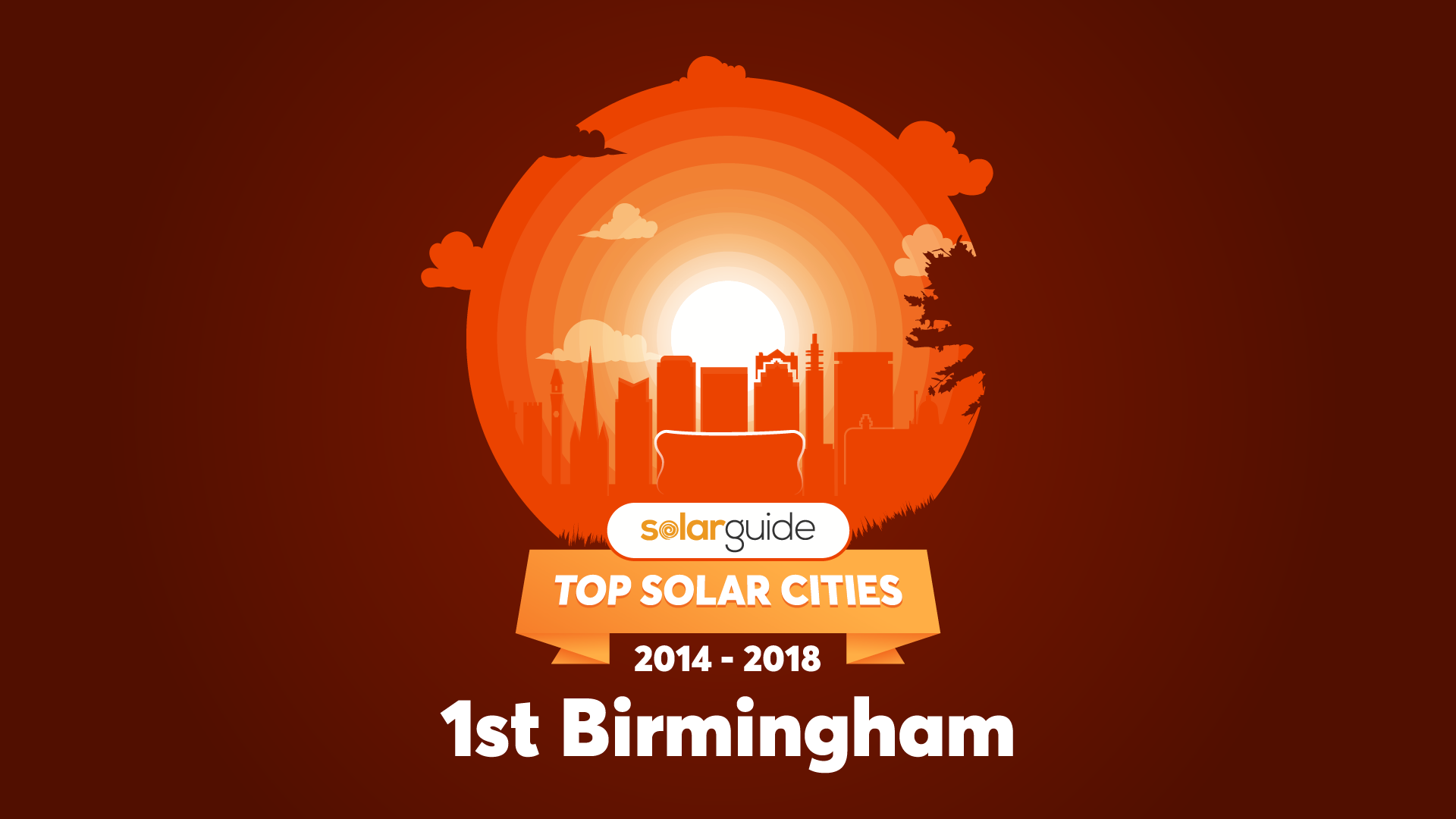 Claiming the top spot and flying the flag for the West Midlands is Birmingham. An impressive 4.73% of the requests for solar panel quotes we received were from Birmingham, although they do have a sight advantage in terms of size! The city is home to over 1 million people and is the second largest city in the UK after London. Other claims to fame include being the birthplace of Cadbury chocolate, the medical X-ray, modern tennis AND the city boasts the most Michelin-starred restaurants outside of London. They can now add Top Solar City 2014 – 2018 to their list of achievements. 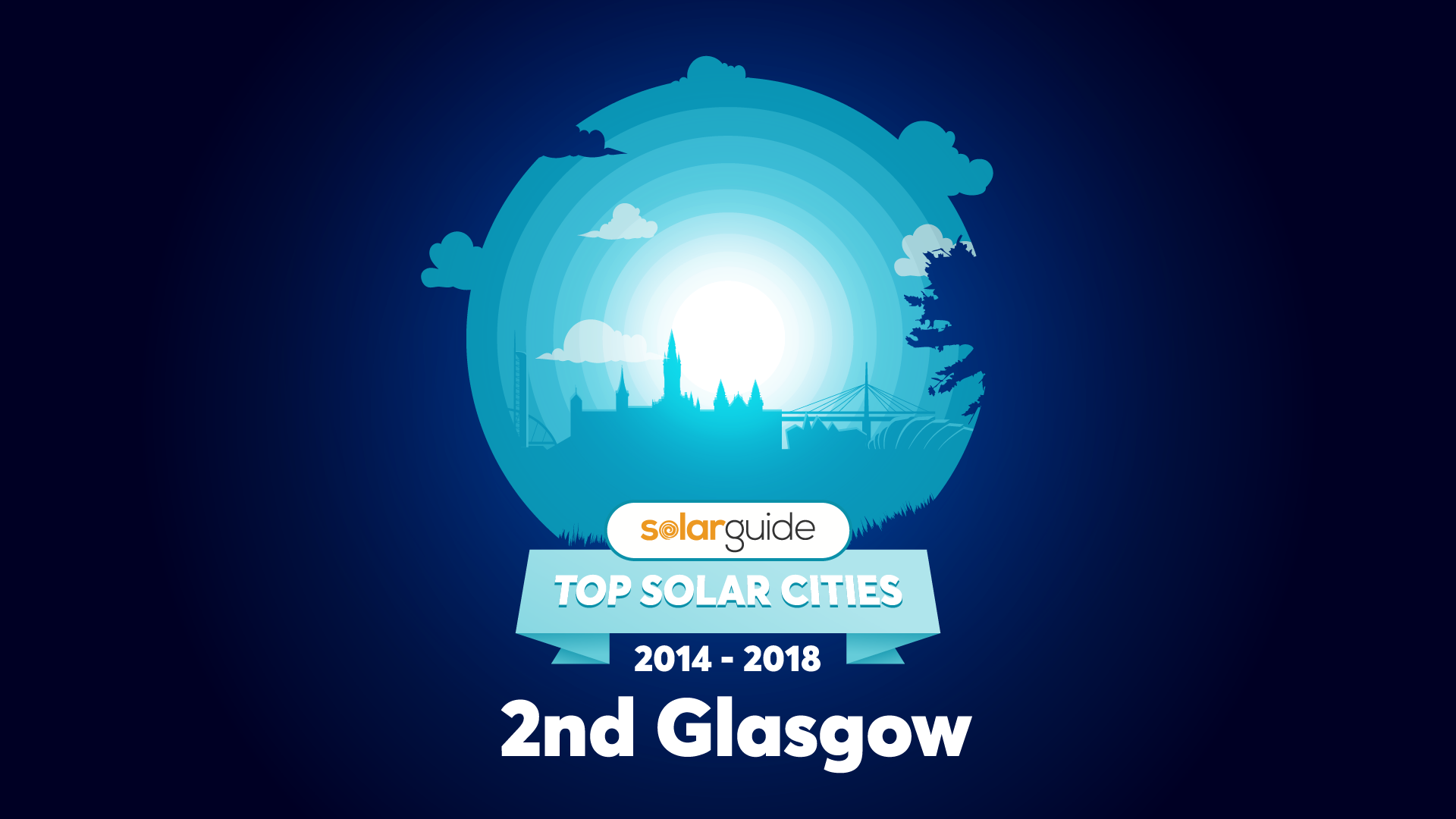 Glasgow is 2nd in our list and again it might be something to do with it being the largest city in Scotland. However, we prefer to think that its high rank has a more romantic slant; the Gaelic meaning behind the city's name: 'dear green place'. Possibly this is because the city has over 90 green spaces in it, but perhaps the ancestral Glaswegians knew their descendants would be leading the way towards a greener future? Ok, maybe not. 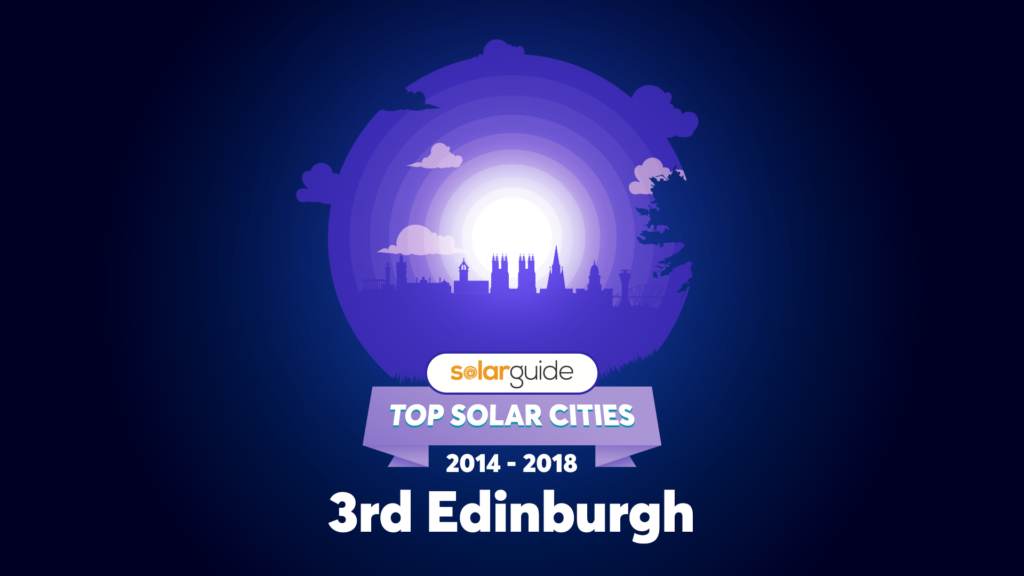 Edinburgh's traditional nickname "Auld Reekie" originates from the words "old Smokey". The city earned the name many years ago when the city ran on coal and trains going in and out of the city covered the air in smoke. Today, Edinburgh is sometimes called the ‘greenest city in the UK’. Why? Well sadly it’s not directly related to solar panels but rather the fact that Edinburgh has 112 parks and apparently more trees per head of the population than any other city in the UK (although this is a title claimed by several cities!) which shows just how far they’ve come. The city also has the highest concentration of listed buildings of anywhere else in the UK at 75%. As listed buildings aren’t usually suited to solar panel installations because of planning restrictions this makes their 3rd place ranking all the more impressive. 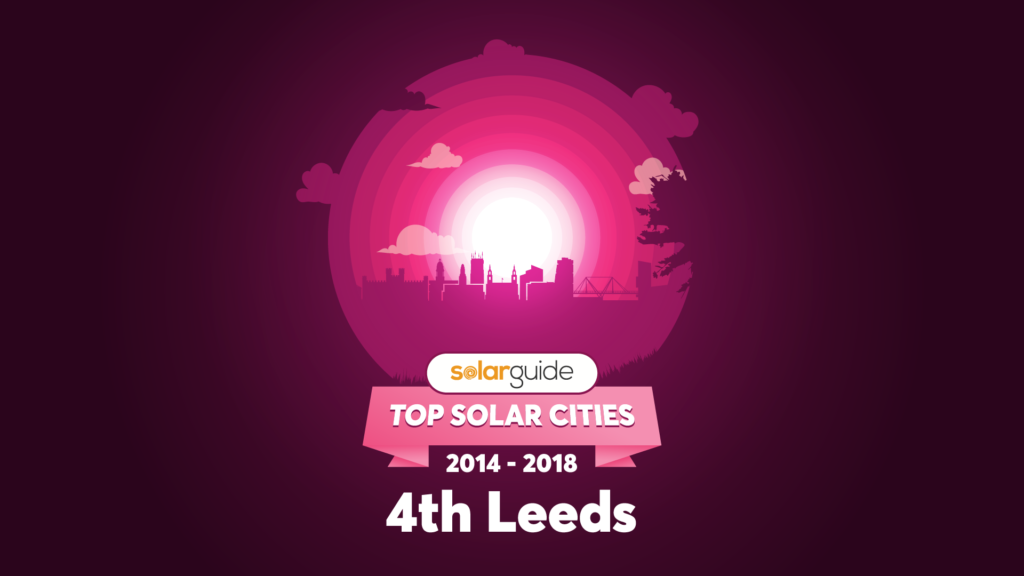 With an average of only 1,242 hours of daylight a year, you’d be forgiven for not guessing Leeds as our 4th placed Solar City. Although not an obvious sunspot, it’s the largest city in Yorkshire, has an economy which is bigger than New Zealand’s and attracts more visitors on an annual basis than traditional holiday destinations like Brighton and Torquay. Two of the city’s biggest shopping centres – Trinity Leeds and White Rose Shopping Centre – are owned by Landsec and have large solar PV arrays by EvoEnergy on their roofs. The PV panels on Trinity were installed in 2017 and were expected to reduce the building’s carbon footprint by around 19 tonnes in the first year. 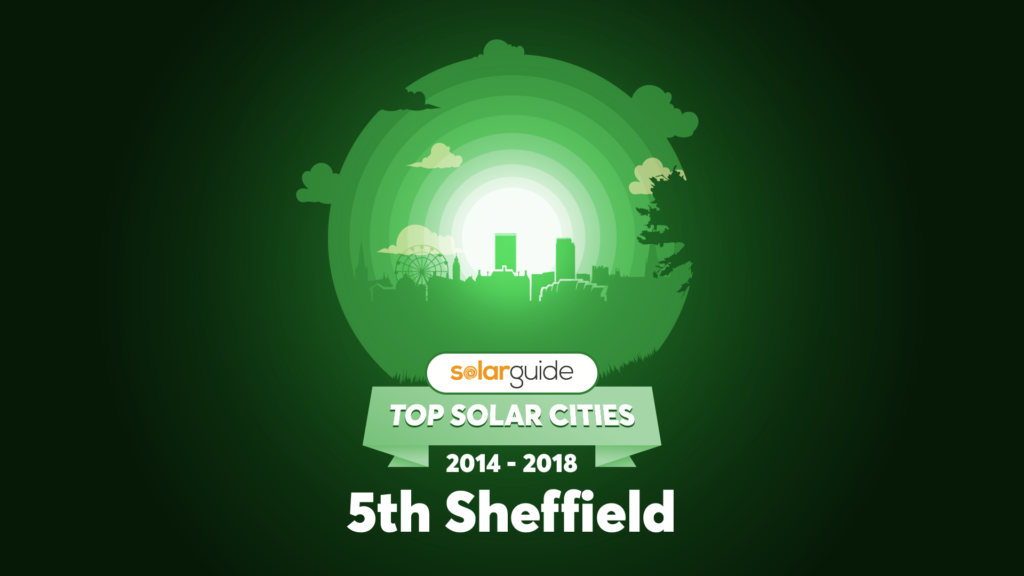 Finishing off our Top 5 is another Yorkshire curve ball. Sheffield is most often associated with industry and the famous Sheffield steelworks which is a far cry from renewable energies like solar power. But what you may not know is that it’s actually located in the valleys of the River Don and its four tributaries and one third of the city is located in the Peak District National Park; no other city in the UK has part of a National Park inside its boundaries. There are more than 250 parks, woodlands, and gardens in the city and an estimated 2 million trees.

We think there's something rather surprising that 80% of the top 5 have in common: they're all ‘up north’.

When considering solar panels, UK homeowners are sometimes concerned about the levels of sunlight they’re likely to get and therefore how much energy the panels will be able to generate. The north of the UK certainly has a reputation for being a dimmer, colder place to live and to a certain extent this is true, but Met Office statistics from 1981 – 2010 show that the difference is minimal. On average the north of England get 1,484.4 hours of daylight per year while the south receive 1,589.7 hours. That’s only 20 minutes extra in a year.

Historically speaking, the appeal of free electricity has been greater in the south. But our data doesn’t seem to suggest a link between daylight hours and the potential value of installing solar panels. For example, the following cities receive the most daylight annually, but only Plymouth made it to our top 20 coming in at 19th.

Of our top solar cities, Sheffield receives the most daylight hours at 1,445 per year and Leeds gets the least at 1,242. So despite misconceptions about solar panels being a better investment down south, it seems the data suggests that the difference is negligible and, if anything, the northern cities are actually blazing the trail.

Special Mention for The Top Solar City of 2018… 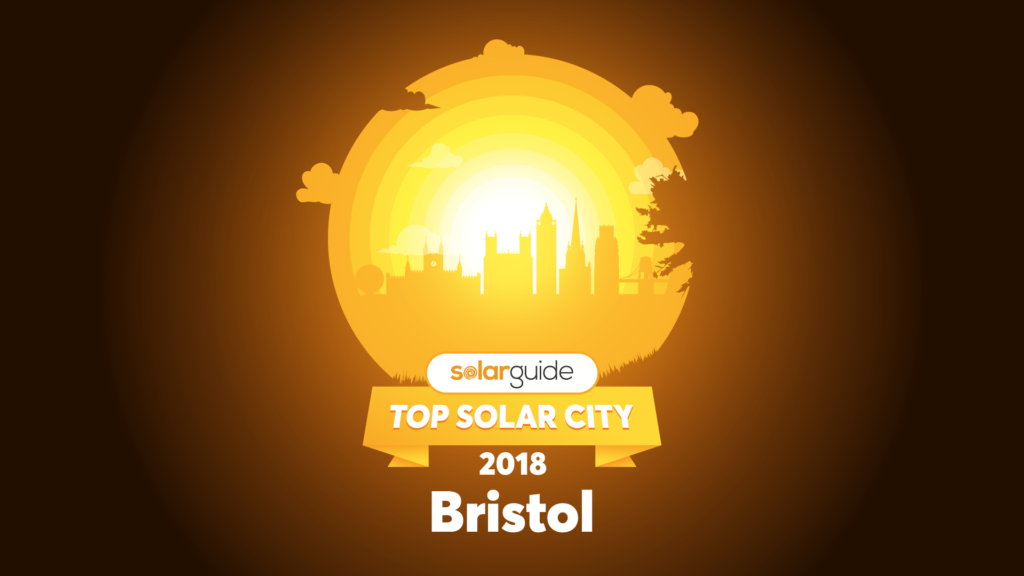 With such rapid advancements in solar technology as well as increased momentum from the government to lower the UK's carbon emissions, we also took at look at what's happened to the rankings in the last 12 months (between 1st October 2017 and October 1st 2018). Bristol, which doesn't even feature in our overall top 5, is currently sitting in 1st place with 3.7% of the total solar panel enquiries received.

What's even more interesting is that in 2015-16 Bristol sat all the way down in 24th place; in just 12 months the city rose 19 places to be placed 4th in 2016-17, and now takes 1st place behind London in 2018. We were curious, what's been happening in Bristol to spark this massive increase in solar panel interest? 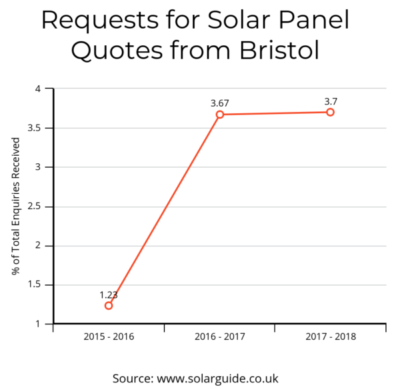 It doesn’t hurt that Bristol’s southerly position means it receives a relatively high number of daylight hours, so homeowners buying solar panels here are likely to see a quicker return on investment than some other places, but that still doesn’t explain the sudden upturn. The turnaround has certainly not been by accident…

Bristol is a leader when it comes to renewable energy; Bristol City Council met their 2020 corporate carbon reduction target 3 years early and even bigger ambitions to be a carbon neutral city by 2050. Since 2005, Bristol City Council have invested tens of millions of pounds in renewable energy generation and energy efficiency including a multimillion pound solar investment programme on corporate and community buildings. In recent years, they've installed over 8 Megawatts (MW) of solar PV across the city. How have they managed it?

In 2015 Bristol became the first UK city to be awarded the European Green Capital Award. The award is intended to support and encourage European cities to improve their environment by recognising those which are making active and innovative efforts to achieve a more sustainable and healthy environment for residents. A major contributing factor towards the European Green Capital success was the Bristol Green Capital Partnership, a network of organisations that have pledged to "work towards a sustainable city with a high quality of life for all". The partnership runs a programme of projects, events and communications to encourage collaboration and collective action through its network.

Bristol Council now have an initiative called the City Leap Prospectus intended to help them with their carbon neutrality goals. They plan to do this by partnering with other organisations which will enable them to reach their goal through investments in infrastructure and energy. Ultimately, the aim of the City Leap project is to provide Bristolians with a "healthier and fairer city" whilst creating jobs, boosting the economy, decarbonising the city and empowering people to "take their future into their own hands".

Marvin Rees, Mayor of Bristol, said: "The City Leap initiative has the potential to completely transform the way our city generates, uses and saves energy in the future. It will play an integral role in our ambitions to increase sustainable and inclusive growth as we work to reduce fuel poverty and build a carbon neutral Bristol.”

Bristol is clearly on a mission to transform its energy use and this is by no means limited to solar.

With Bristol very much playing the part of role model in the pursuit of greener living and futures built on renewable energy, how has the rest of the UK been doing? Is there much interest in solar panels where you live?

Between October 2017 to October 2018 49.9% of the total number of enquiries we received were from London; the table and map here show the Top 10 Solar Cities for this period excluding London.

Between October 2016 to October 2017 43.35% of the total number of enquiries we received were from London; the table and map here show the Top 10 Solar Cities for this period excluding London.

Between October 2015 to October 2016 43.59% of the total number of enquiries we received were from London; the table and map here show the Top 10 Solar Cities for this period excluding London.

Between October 2014 to October 2015 41.65% of the total number of enquiries we received were from London; the table and map here show the Top 10 Solar Cities for this period excluding London.

Mayor believes solar has a bright future in Bristol

The Mayor of Bristol, George Ferguson, aims to emulate the Spanish city of Barcelona by increasing the number of solar photovoltaic…