The Solar Trade Association has hit out at the European Commission and its proposals to impose tariffs on solar panels imported into the European Union from China, saying the duties will restrict free trade and solar market growth. 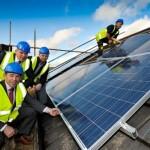 As we reported yesterday, the European Commission has put forward plans which will see levels of between 37.2% and 67.9% imposed in an attempt to counter unfair pricing by Chinese solar panel manufacturers who practise “dumping” – selling their solar panels to members of the European Union at below cost prices.

Commenting on the proposals CEO of the Solar Trade Association (STA), Paul Barwell said that while the duties were by no means surprising, the STA was still taken aback by the levels which were being proposed. Barwell said introducing tariffs would have a damaging impact on the UK solar market, with large scale ground-mounted solar panel installations most at risk. Aside from restricting further growth solar panel duties would also have a negative impact on the UK, throwing us off course to meet our 2020 renewable targets.

A price rise in the cost of non-Chinese solar panels was another concern highlighted by the STA. Given that manufacturers would no longer have to make their prices competitive with Chinese modules, the removal of lower priced products would no doubt cause an increase in prices. It was, Barwell said, a “commercial reality”.

The STA will be actively encouraging the Department of Energy and Climate Change and the Department for Business, Innovation & Skills to vote against any such tariffs.

A not-for-profit association, since 1978 the Solar Trade Association has represented companies working in the solar electricity and solar heating sectors.

As the European Commission prepares to levy importers of Chinese solar panels, more than 1,000 firms from across Europe’s solar…