The construction of what looks set to become the world’s largest solar bridge and a template for green stations has begun in London today. 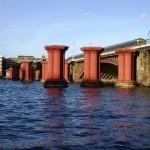 A train passes over Blackfriars Bridge

Scheduled for completion next year, Tuesday signals the start of the 4,400 solar panel installation above the new Blackfriars railway station platform along the Capital’s historic Blackfriars Bridge.

Built in 1886, the site is undergoing a multi-million pound face lift, with the Victorian bridge set to host around 6,000 square metres of solar PV panels.

Following in the footsteps of the Kurilpa footbridge in Brisbane, Australia – the only other solar bridge known to exist – once constructed London’s solar bridge will be the largest of its kind in the world.

The chief executive of Solarcentury – the company behind the what will be London’s largest solar array – Derry Newman said Blackfriars Bridge is an ideal location for solar, right in the heart of London.

“Station buildings and bridges are fixed parts of our urban landscape and it is great to see that this one will be generating renewable energy every day into the future,” he added.

According to Solar century, the solar array will be capable of generating in the region of 900,000kWh of electricity annually. Meeting half of the station’s energy needs, the solar panels will help to reduce their annual CO2 emissions by an estimated 511 tonnes.

Network Rail’s Lindsay Vamplew and the project’s director said the refurbishment will create an iconic station by “bringing it bang up to date with 21st century solar technology.”

The Prime Minister, David Cameron, has praised the potential of solar PV to help Britain diversify its energy mix alongside…