The price of solar PV systems has come down considerably in the last 12 months yet consumers remain confused about how much solar panels cost, new research has revealed. 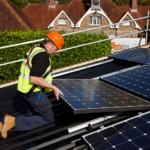 The Eco Experts conducted research into energy costs and green technologies determine how much knowledge members of the British public have when it comes to renewable energy. Almost 2,000 people took part in the survey and the company – which specialises in energy efficiency and sourcing sustainable technologies – discovered that a huge number of energy consumers, some 92%, are worried about the rising cost of bills. Just 8% of people who fall into the category of the country’s highest earners, said they aren’t concerned about their energy bills.

Once opinion on energy bills had been established, the same respondents were they asked about installing renewable energy technologies as a means of reducing household energy costs. Solar power was established as the most popular amongst consumers, the research found that despite becoming more common and accepted cost remains a barrier for many people. And often it’s a misconceived one. Although one in three people are aware that installing a solar PV system can save and generate households in the region of £1,000 a year, some two thirds don’t know how much it actually costs to install.

Commenting on the results of the research David Thomas from Eco Experts said that consumers were concerned about how much energy was costing them.

“Our research has basically shown that people are very anxious about the cost of energy and the fact that it lies outside of their control. They try to save energy but still their bills are rising. And all the while, as most of the UK is feeling this way, there is a solution that is being undervalued and overlooked,” he said.

Interestingly, 80% of those surveyed said they would have solar panels if the technology could be installed at no upfront cost to themselves.