Bristol’s science and technology centre is celebrating after discovering that its solar panel system is exceeding all expectations in terms of the amount of power the panels have generated over the past 12 months. 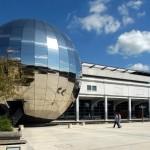 At the time of installation it was estimated that the solar panels would be capable of producing around 47,000 kWh of electricity annually. However the leading science centre has revealed that the 50 kWp system has in fact managed to exceeded all expectations, generating 48,637 kWh. The system had its best month last May and produced 6,791 kWh of solar electricity.

Commenting on the results, the centre’s Sustainability Manager Chris Dunford said the were delighted by the revelation that the solar system had produced more solar power than originally hoped. “The results we’ve produced over the year have been brilliant, and exceeding what we planned is fantastic.”

Perhaps most interestingly the solar panels performed best on days which were cool and bright, at opposed to really hot days which, let’s face it, are few and far between in the UK.

“It’s not actually the hottest days that produce the most amount of energy as there’s almost too much heat for the panels to cope with, instead it’s bright but cool days they work at their most efficient,” explains Chris.

Consequently, At-Bristol has also managed to reduce its carbon footprint even further. The centre had aimed to cut carbon emissions by around 25 tonnes of carbon dioxide annually, but that target has been well and truly met by almost 3,000 kg of CO2.

Mayor believes solar has a bright future in Bristol

The Mayor of Bristol, George Ferguson, aims to emulate the Spanish city of Barcelona by increasing the number of solar photovoltaic…