The Australian division of Bristol based Solar company, Wind Prospect, is celebrating after being chosen to be part of a consortium which will build the first big solar thermal power plant in Australia.

The Solar Dawn project will be installed in South-West Queensland, and will use mirrors focused on water-filled tubes to create steam, turn turbines and generate enough electricity to power 115,000 homes. Scheduled to begin operations in 2015, the facility will generate a maximum of 250 megawatts of electricity and will cost an estimated $1.27 billion to complete. The Australian Government will contribute $491 million, while the State Government of Queensland will provide $79 million.

Wind Prospect chief executive Euan Cameron said: “The Solar Dawn project is a major achievement for Wind Prospect and its partners… it highlights Wind Prospect's innovative and pioneering approach to all aspects of the international renewables arena.”

Energy minister Charles Hendry added: “I welcome the fact that a UK company is playing a vital role in one of the world's largest renewable energy projects to be built in Australia.” 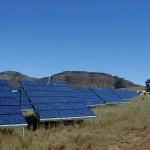 It’s not just the UK solar industry that has felt the force of Government cuts to solar subsidy schemes. It’s…