Ofgem has confirmed that the Feed-in Tariff for domestic solar PV systems will continue to remain unchanged, but come 1 May 2013 new rates for mid-large sized solar arrays (of 50kW or more) will come into force. 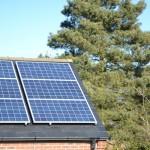 In keeping with the Government’s degression regime introduced last year, from 1 May installations in excess of 50kW capacity will endure a cut of 3.5%. While residential installations will remain unaffected by the Feed-in Tariff changes, businesses keen to install mid to large sized solar panel systems to help reduce their energy bills will need to act swiftly if they want to benefit from the tariff rate as it is now.

Reductions occur, according to the deployment mechanism, if capacity is breached in the previous quarters figures. Cuts will also be implemented in cases where no cuts have been introduced for three consecutive quarters.

In the case of mid-sized solar PV systems that trigger point hasn’t been reached for the last nine months and therefore the Feed-in Tariff has remained unchanged. This is known as the nine-month rule, which sees cuts automatically imposed even when deployment rates are slow.

It’s a surprising move, given that uptake of mid-size solar arrays is somewhat struggling. Industry trade bodies want the Government to readdress the nine-month rule so that Feed-in Tariff reductions kick in only if and when deployment figures justify it.

Voicing his concern about the automatic degression rule, Ray Noble from the Solar Trade Association (STA) believes that if the industry has any hope of getting back on its feet the Government needs to put the rule on hold for at least three months.

“If there’s no deployment, then lowering the rates isn’t going to save the government money anyway. Instead, it just makes it even harder for the market to take off,” he said.

In a statement the STA said that reducing support from 7.10p/kWh to 6.85p/kWh would essentially put what is an important sector of the solar industry even more out of reach.

Feed-in Tariff cuts to installations of 50kW and above are not the only change to be implemented. The Department of Energy and Climate Change has confirmed that rather than the usual three monthly degression model, Feed-in Tariffs will apply for just two months, from 1 May to 1 July. The one-off, an administration change, has been deemed necessary in order to bring degression quarters back in line with Feed-in Tariff quarters.

Based on provisional figures for solar installations between August and October, it’s highly likely that there will be no degression…

Good news. There’s to be no automatic degression in solar feed-in tariff rates come October. It means the amount of…