We knew it was on the cards but we now have official confirmation from energy regulator Ofgem: solar feed-in tariffs (FiTs) are to fall by 3.5% in January.

It means tariff rates for domestic solar photovoltaic (PV) installations will drop from the current 14.38p/kWh to 13.88p/kWh from 1 January 2015.

All tariff bands up to 50kW will be cut on this occasion. With no degression enacted in previous months, solar PV feed-in tariff rates are cut automatically after 9 months, regardless of the level of deployment. Therefore, Generation Tariff rates for new installations on and after 1 January up until 31 March 2015 are confirmed to be set at the following:

The export tariff will remain at 4.77p/kWh.

In terms of the number of solar PV systems installed this year, systems from 0-10kW remain the most popular. Between January and September 2014, 90,659 PV systems have been deployed under the FiT scheme. Since the feed-in tariff scheme was introduced in April 2014 to help drive uptake, solar deployment in the domestic market has really taken off. Domestic installations have been far and away the most popular. However it’s predicted that ground-mounted solar will overtake rooftop capacity before the end of 2014.

When the scheme first launched back in 2014 the solar feed-in tariff was set at 43p/kWh. However solar panel installation costs were very expensive. Today solar PV prices are around 70% cheaper compared to what they were 4 and a half years ago. How much solar panels cost to install will depend on the system size (number of panels) and the type of solar panels (monocrystalline, polycrystalline, thin film, etc). A 2kWp system (typically 8 panels) prices start from around £3,800, with larger 4kW systems (typically 16 panels) costing around £5,900.

The feed-in tariff remains the main financial incentive for adopters of solar energy, alongside the reduction in energy bills achieved by generating your own electricity. With a guaranteed tax-free income for 20 years, it’s no wonder more than half a million domestic UK dwellings have chosen to install solar panels on their rooftops. Households who install a 4kW system could benefit from around £800 a year thanks to FiT payments and electricity bill savings.*

Solar Guide works with approved and rated MCS solar installers. If you’re interested in making the switch from expensive fossil fuels to renewable solar energy, we can provide you with up to 3 free quotes to help you get the very best solar installation for a competitive price. 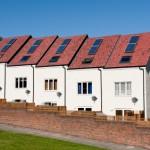 Ofgem has confirmed that come April solar photovoltaic systems up to 4kW will see feed-in tariff rates drop by 3.5%. It…