Who makes the most efficient solar PV panels in 2015?

In October we reported on SolarCity producing the most efficient rooftop solar panel in the world with tests showing a 22.04 percent module-level efficiency.

Since then SolarCity has been knocked off of the efficiency top spot by Panasonic who announced their panel breakthrough with an efficiency level of 22.5 percent for a commercial-sized prototype.

Neither of these modules have hit the market yet, with SolarCity explaining that their new high efficiency modules will be produced in smaller quantities to begin with before being produced on a larger scale. Panasonic, who unveiled their new panel just days after SolarCity, have not yet announced any likely release dates but have expressed that this newly developed technology will eventually be scaled into volume production.

Alongside this announcement from Panasonic came the introduction of their new HIT® N330 panels which will be available in UK and European markets from March 2016. Whilst not as efficient as their latest solar breakthrough, the HIT® N330 panels cans till reach an impressive 19.7% module-level efficiency (with a nominal power output of 330 watts).

So which other names in solar lay claim to having the most efficient Solar PV panels currently on the market? According to The Eco Experts SunPower tops this list with their monocrystalline X21-345 model which reaches 21.5% module efficiency. Other brands with monocrystalline panels in the list include Ja Solar, Sanyo and AUO whilst Phono Solar's Polycrystalline PS330P-24/T also makes the cut.

With the efficiency of solar modules improving and the cost of solar installation half of what it was just 5 years ago* now is a fantastic time to go solar. SolarCity produces most efficient rooftop solar panel in the world 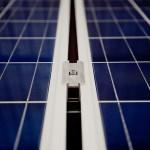 On 2 March Panasonic announced that they have created a solar module with a conversion efficiency of 23.8% at research…