Researchers in the U.S. say they’ve developed a new kind of solar cell that can generate energy during the day and night.

The key to this promising new form of renewable energy is down to the cells’ ability to harvest infrared radiation as well as visible light, says Steven Novack of the U.S. Department of Energy’s Idaho National Laboratory in Idaho Falls.

He explained that almost half of the available energy in the spectrum of solar radiation resides in the infrared band, and infrared is re-emitted as heat by the Earth’s surface after the sun has gone down, meaning the cells can even capture some energy during the night.

Novack estimates a complete system using the new cells would have an overall efficiency of 46 per cent, whereas the most efficient current silicon solar cells top out at about 25 per cent.

Furthermore, the new cells can absorb radiation at a variety of angles, the researchers say.

Current solar cells can only produce their top output in certain conditions. For example, if the sun is in the wrong position, sunlight is reflected off a silicone solar cell instead of being absorbed to create energy. 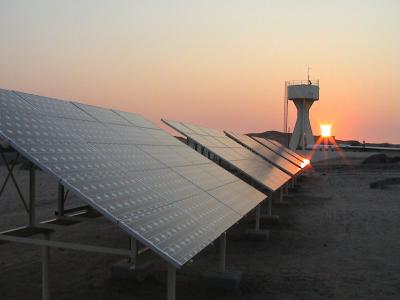 Can I Use Solar Power At Night?

Yes and no, solar panels do not work at night. However, what you can do is store the energy you… Solar cells that can generate energy from rain developed

Scientists from the Ocean University of China have developed a solar cell which can generate power during periods of rain.…