Uttlesford District Council is set to install solar panels on one in every three properties of their housing stock - up to 1,000 of the 2,856 tenanted properties - by April 2012, and hopes the scheme will enable tenants to save money on their energy bills.

Initially had been hoped that the Council would be able to manage the scheme, however with reported costs in the region of £6 million, a the project will be built and managed by a third party, and via the feed-in-tariff (FIT) scheme, will be allowed to sell 'excess electricity' back into the national grid, meaning the initiative will cost the taxpayer virtually nothing.

"It is a win-win situation; it is minimal cost to the council and around one third of homes will get panels to help tenants save money," said cabinet member for environmental services, Cllr Julie Redfern.

Uttlesford Tenants Forum is in favour of the project, with David Parish, vice chairman of the forum saying that the group were "very pleased" with the outcome.

The Council is committed to addressing climate change and installation of solar panels on council houses will help lower the carbon emissions in the district. 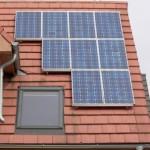 Almost 1,200 council homes in Essex are to have solar panels installed, after councillors gave the project the go-ahead. According…