The effects of climate change are being seen all around the world and in one way or another, will have an impact on us all.

If you're not already looking for ways to reduce your carbon footprint, these 8 climate change facts might encourage you to take action.

You don't have to become a climate change activist to make a difference, there are plenty of small changes you can make to your daily life which will dramatically lower your impact on the environment.

One such way is to install solar panels, which will not only help to reduce the carbon footprint of your home but cut your energy bills too.

What is Climate Change?

Climate change, sometimes known as global warming is a term used to describe the rising global temperature of the planet.

The average global temperature has risen by 1°C since 1880, which might not sound like much but that's the fastest increase in the history of the Earth.

Rising global temperatures are having a serious effect on the environment, animals and people. These are only some of the impacts that climate change will have:

Human activity since the industrial revolution has seen the volume of greenhouse gases in the atmosphere increase rapidly. There's a number of reasons why we're seeing an increase in global temperatures, including:

The burning of fossil fuels is by far the biggest cause of climate change and is done to generate electricity, heat our homes, power transport and much more.In the UK, transport is the sector producing the highest volume of greenhouse gas emissions. 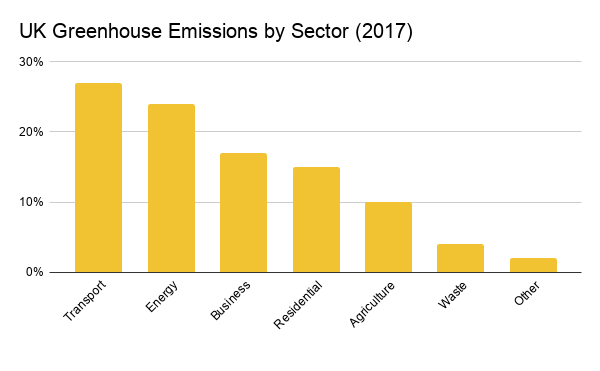 When it comes to climate change there are some scary facts that show the scale of the problem that the planet is facing.

The UK is targeting 'net zero' carbon emissions by 2050, which means that the carbon footprint of the UK will be neutral. Many believe that 2050 is much too late and more needs to be done sooner to prevent irreversible impacts on our planet.

A global temperature rise of only 2°C could have a detrimental impact on the planet and is why countries agreed to the Paris Climate Change Act, which commits nations to limiting the increase to 1.5°C.

As the table below shows, a difference of half a degree is much more significant than it might seem.

So, what can you do to help tackle climate change?

Use more sustainable forms of transport

The damage that petrol and diesel fueled cars have on our planet is of increasing concern for many drivers. However, driving a car is part of everyday life for many but there are some alternatives:

Electric cars have become much more affordable in recent years, so it's now much easier to make the switch from petrol or diesel. Advancements in the performance, mileage capabilities and overall looks too have made them much more desirable.

Plus, properties with a solar PV system can charge an electric vehicle using free renewable energy, helping to save you money on refuelling costs.

We compared the Best Electric Cars in the UK to help you find the right one for your home.

United Nations (UN) experts have said that switching to a plant-based diet can really help the fight against climate change.

This doesn't mean going vegan overnight but reducing the amount of red meat and dairy in your diet would greatly reduce your carbon footprint:

Cattle farming is one of the root causes of deforestation. As demand for red meat and dairy increases, so does the need for land, which is seeing large amounts of forest cut down so that the land can be used for farming. These trees are not only natural habitats of wildlife but also absorb carbon from the atmosphere.

Plastic has become an almost unavoidable part of modern life – it's used to carry shopping, water is sold in it and it's even used in some tea bags!

Carrying a refillable water bottle, choosing unwrapped fruit and veg and switching to soap and shampoo bars, will reduce the amount of plastic waste produced by your home.

The sun provides the Earth with more energy every hour than humans use in an entire year so it doesn't quite add up that we rely so heavily on fossil fuels.

In the UK, the vast majority of electricity is generated by burning fossil fuels, which is a highly carbon intensive process – double the emissions of natural gas production in fact (0.519kg of CO2 per kWh compared to 0.216kg of CO2 per kWh).

While an increasing number of renewable energy suppliers are delivering UK homeowners with electricity generated by wind and solar, their tariffs can be pretty high. So, why not take the matter into your own hands?

Installing a solar PV system comes with an initial upfront cost but once installed, your home will be powered by free renewable energy and the benefits of solar panels offer more than reducing your carbon footprint:

If the benefits of solar panels appeal to you then take a few moments to complete our simple online form to get free installation quotes from up to 3 solar panel installers based in your area.

Comparing multiple quotes will give you the best chance of finding the most competitive installation price – meaning that you'll potentially see a return on your investment much sooner.