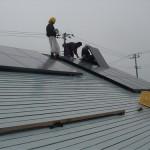 June did take the record with 1,397 installations in the UK, only to be bettered the following month with 1,736 fittings.

But August dwarfed both results, posting a monthly high of 3,606 solar photovoltaic panels.

In fact, the solar industry has boomed massively since the launch of the highly regarded Feed-in Tariff scheme that pays homeowners for the electricity created by on-site renewable sources like solar PV panels, and an extra fee for any electricity produced that isn't used by the home.

Since the launch of the Feed-in Tariff, 8,037 homes have opted to have solar PV panels fitted to their homes.

The improved figures were released as part of Ofgem's Feed-in Tariff Statistical Report. Ofgem updates the uptake of microgeneration technologies that are eligible to qualify for the Feed-in Tariff.

Since the launch of the incentive scheme, just 373 wind devices, 39 hydro systems and two micro-combined head and power (Micro-CHP) installations have been fitted.

To find out how much you could save by installing solar PV panels, try Solar Guide's Solar PV Feed-in Tariff Calculator by clicking here.

Solar 'pioneers' not to get increased payments 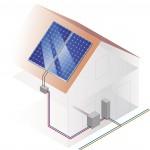 The Feed-in Tariff for the generation of electricity using small-scale onsite renewable technology has paid out a total of £182,059…